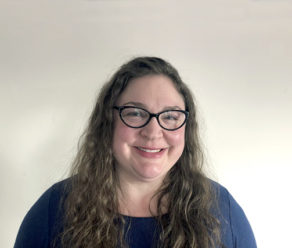 Gretta joined JFS in the fall of 2020 taking a part-time position to allow more time for her art. Previously, she worked at St. Catherine’s Center for Children as a Community Based Clinician. Before that, she has worked at the Sidney Albert Jewish Community Center as Director of After School and led summer school classes for children at Camp Taf in theater, mindfulness and art. Gretta was a Mental Health Clinician at Vanderheyden Hall, later interning at Bethlehem Senior Services and the Mental Health Association in New York State (MHANYS). Passionate about mindfulness, mental health and the arts, she has created and led many groups at the Shambhala Meditation Center and Albany School for the Humanities for children and adults.

Gretta earned a Bachelor’s Degree from Shawnee State University in English and Theater before obtaining a Master’s Degree in Child Development and a Master of Education in Cultural Studies at Ohio University. She received a Master of Social Welfare at the University at Albany, specializing in trauma-informed mindfulness based care, expressive arts, and emotional regulation. Gretta lives in Albany with her husband and cats, BoyChild and Steve McQueen. When not working, she enjoys yoga, art, dancing and long walks in nature.